For Dennis Walters, it all started one day when he took a shortcut home through the woods and noticed the 18th hole of a golf course.

“I saw a guy hit a drive 250 yards off the tee at Jumping Brook Country Club and couldn’t wait to tell my father. The next day, I met the pro there, Johnny Alberti, and he gave me a Robert T. Jones driver which I still have. 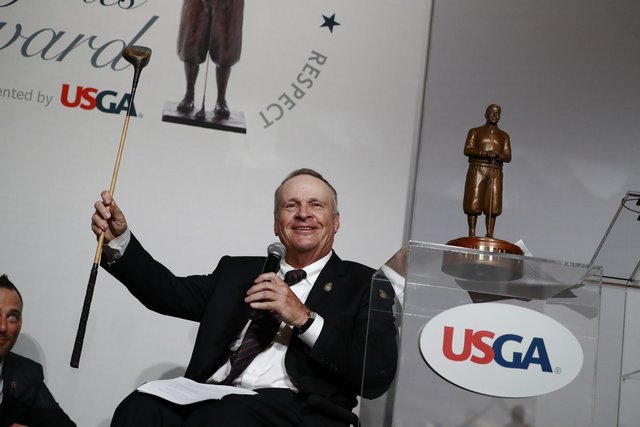 Last summer, I brought it to the ceremony when I was given the USGA’s Bob Jones Award.”

“That evening, Jack and Barbara Nicklaus were my presenters – and they will be again when I am inducted into the World Golf Hall of Fame on June 10 in Pebble Beach. Not in my wildest dreams did I think any of this was possible when I was lying in a hospital bed 45 years ago. It’s been quite a journey going from that hospital bed to induction into the World Golf Hall of Fame.”

Walters will be the first New Jersey native to be inducted into the World Golf Hall of Fame. In 1978, he was honored with the Ben Hogan Award by the Golf Writers of America for his remarkable comeback from a devastating golf cart accident in 1974, when he was paralyzed from the waist down. He is one of only 11 honorary lifetime members of the PGA of America – an iconic group including Bob Hope and former U.S. Presidents Eisenhower, Ford and George H.W. Bush.

“If my life was a movie, you’d say it was pure fiction. It had to be made up, because no one could have done this,” he said.

Before his June induction into the World Golf Hall of Fame, Walters will be enshrined as part of the second class to enter the New Jersey State Golf Association Hall of Fame on Wednesday, May 1. Walters was a promising young golfer before his 1974 accident changed his life.

Born in Neptune, New Jersey, he is the only player in history to win the NJSGA Junior, the NJSGA Caddie and the New Jersey P.G.O. (Public Golf Organization) Junior Public Links Championships in the same year (1967), which he achieved at age 17.

After graduating Neptune High School, he attended North Texas State on a golf scholarship – having never seen the campus. He finished 11th in the 1971 U.S. Amateur Championship, missing an invitation to the Masters by only two shots.

In 1972, he was co-runner-up to Art Silvestrone Sr. at the New Jersey State Open Championship, shooting 69 in a playoff. He had reached the final stage of the PGA Tour’s Qualifying School in 1973 when shortly thereafter, the golf cart accident at Roxiticus Golf Club in Mendham changed his life.

After the accident, Walters distinctly remembers sitting by the window while at the Kessler Institute of Rehabilitation in West Orange and staring across the street at Essex County’s Francis Byrne Golf Course.  Just three years earlier, he had qualified for the U.S. Amateur just up the hill at its former sister course, the Essex County Country Club.

After he returned home, his father, Bucky, convinced Dennis to go try and hit golf balls into a net while in his wheelchair. After much experimentation, the idea to mount a swivel seat on the passenger side of a golf cart was born. 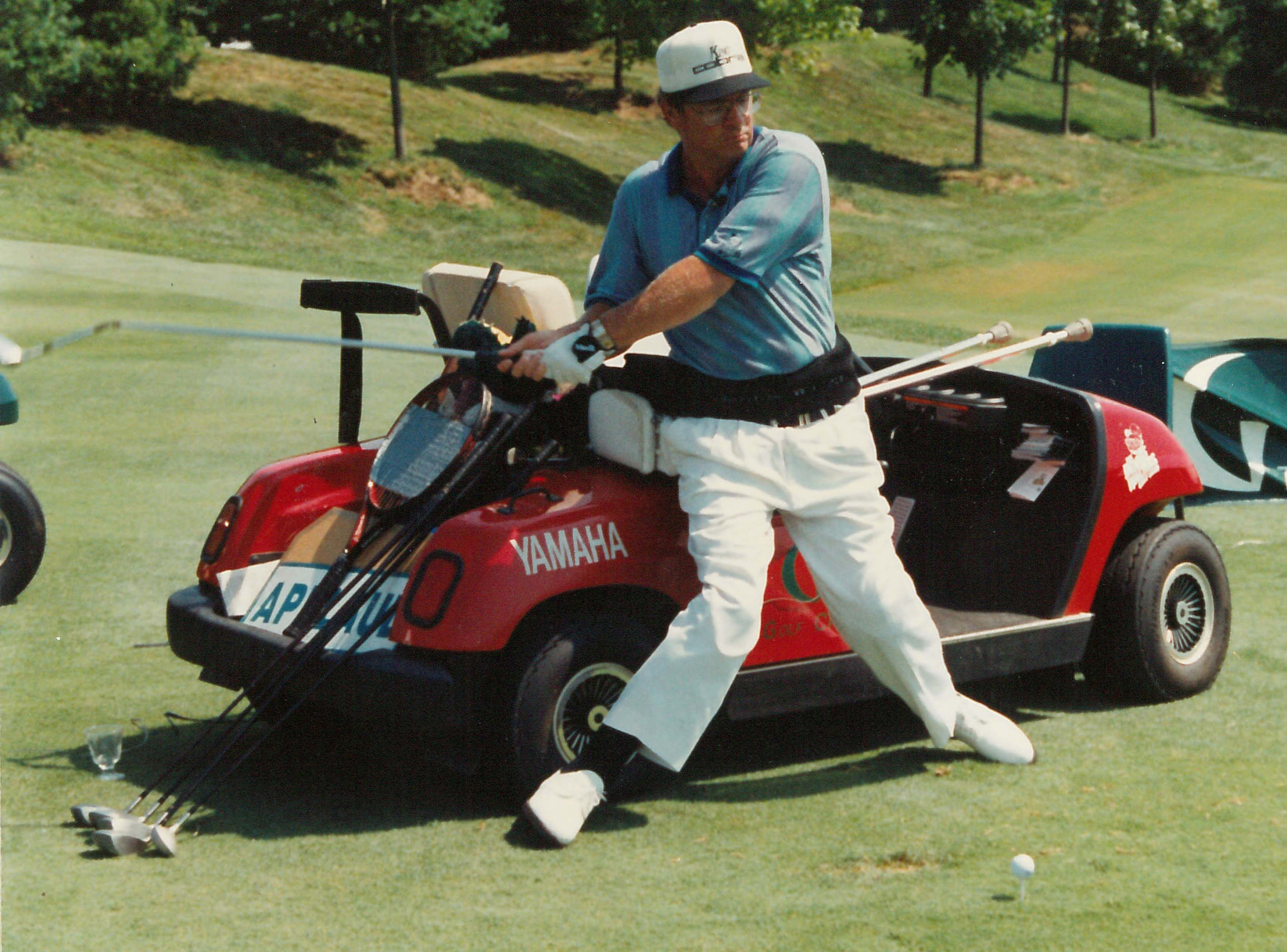 “And that’s how I got back on the golf course again,” he said. That was the beginning of Walters’ journey into becoming a world-famous trick-shot artist and showman as the legend behind the Dennis Walters Golf Show, which began in 1977.

“I made up my mind that when I got out of my hospital bed, I was never going to give up and I would search and find a way that I could play golf again. Everyone told me I’d never be able to play golf because I couldn’t stand so I started hitting golf balls sitting down. This proves golf can be a game for everyone,” Walters said. “I try to prove that with every swing I make.”

Lifelong friend Wayne Warms, a member of the New Jersey PGA Section Hall of Fame and champion of youth golf, has been Walters’ best friend since the early 1970s. “He’s always had the same personality; he still seeks perfection. He has the right attitude and to this day still works on his game, trying to get better. Before the accident, he was right where he wanted to be and in a split second, it was all taken away from him. He had to pull himself back up to get where he is now. I really believe it’s the greatest story in the history of our game,” said Warms, a teaching professional at Eagle Oaks Golf and Country Club in Farmingdale.

Warms continued, “Dennis is the genesis of the movement of disabled people achieving in golf. There was really no one before him. He has traveled all over the world spreading his message. He’s an inspiration to all of us. I’ve been teeing up balls for him since 1976 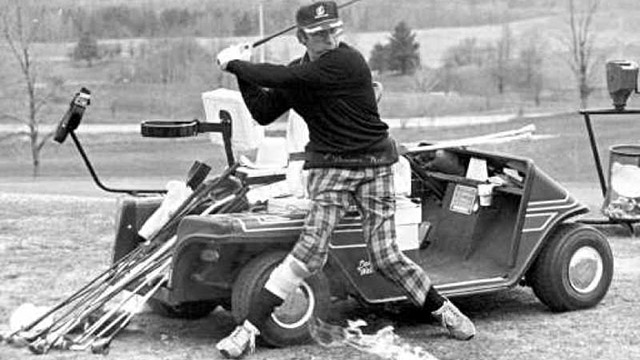 and I’m still amazed how good he hits the ball. His hand-eye coordination is incredible and he doesn’t miss. I am convinced he would have succeeded on the PGA Tour – he would have been a fantastic golfer and maybe a Hall of Famer, without his disability.”

In recognition of his storied career, the International Network of Golf honored Walters with the creation of the Dennis Walters Courage Award in 1994. It is presented annually to an individual who has overcome great odds to participate in and contribute to the game of golf. In 2008, Walters was honored by the PGA of America with its Distinguished Service Award.

“I love golf so much. I didn’t want to live my life without having golf in it. After the accident 45 years ago, I never thought I could accomplish anything, but I was determined to find a way to play the game I love. After I started performing, I learned that I was giving people, hope, encouragement and inspiration.  I was showing people what was possible in a seemingly impossible situation. So, yes, I’ve had a career hitting trick golf shots for 42 years, but I’ve had the opportunity to help others and that’s made it even better.”

Thanks to family and friends, Walters found a way to return to the game and continues a busy annual schedule, performing at junior golf clinics, events conducted by The First Tee, as well as corporate and charity events. 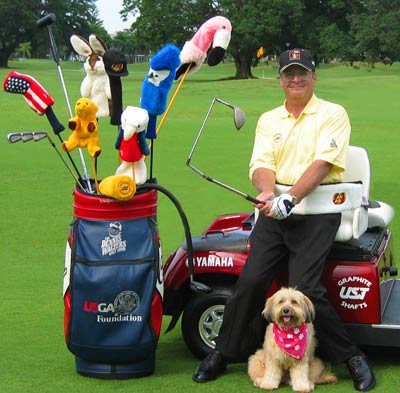 He travels each summer for shows in Chicago, the Philadelphia-New York area, and in New England – all with his dog, Bucky, named after his father.

Last year, the USGA bestowed to Walters its highest honor, the Bob Jones Award, which was a highlight of U.S. Open Championship week in Southampton, N.Y. Presented annually since 1955, the Bob Jones Award recognizes an individual who demonstrates the spirit, personal character and respect for the game exhibited by Jones, winner of nine USGA championships.

This summer, Walters, who (while he caddied) watched Jack Nicklaus win the 1967 U.S. Open at Baltusrol will join Nicklaus and all of the greats with his induction into the World Golf Hall of Fame. His plaque will be mounted between Lanny Wadkins and Tom Watson.

Walters speaks fondly of his upbringing in New Jersey: “I am so proud to be included in this illustrious group of inductees because New Jersey is where this journey started. The Jersey Shore was a great place to grow up. I have great memories of caddying at Jumping Brook and Hollywood. Without so many mentors and friends from those days, there probably would have been no golf career.”

“In the beginning, I did it all for myself. As it went on over time, it’s about me giving encouragement and hope to others, some of the most precious gifts you can give.”

If Dennis Walters’ life is a movie, it’s one you don’t want to miss.