The story of Joseph McBride can be told in many ways. Whether it is through his esteemed playing record, reputation as a kind – yet fierce – competitor, or dedicated family man, McBride represented excellence. He holds a place among the golf legends in the state’s history and was the patriarch of one of the most successful golf families in New Jersey. He was also a proud U.S. Navy Veteran, highly successful businessman, and a longtime member of Arcola Country Club in Paramus.

Born in 1919, McBride’s first love was tennis, which he played as a youngster. After graduating from St. Peter’s Prep in Jersey City, he enrolled at Georgetown University where he honed his golf game and was named team captain.  A year after earning his degree, World War II began; he served as a U.S. Navy aviator for the duration of the war and flew F4F Wildcats and F6F Hellcats.

After the war ended in 1946, the Navy retained McBride as a flight instructor. His son, Mike McBride, believes that his dad was asked to remain in the service for reasons in addition to his flying abilities: “I think the admirals wanted to play golf with him, and that’s where he really refined his skills. His college roommate, Joe Smith, was a member at Winged Foot and arranged for my dad to take lessons from pro Claude Harmon. It was Harmon who really taught him his short game.”

Standing only 5’ 7”, McBride was a relatively short hitter – but he repeatedly wore down his rivals with a relentless short game. His tremendous ability around greens, in addition to his rapidly developing all-around skill, served as an impetus for a most remarkable competitive run.

At age 29, McBride would have his first taste of “major” success, when he won the 1948 NJSGA Amateur Championship. He bested defending champion (and NJSGA Hall of Fame member) Chet Sanok at Upper Montclair Country Club, 8 and 6. On June 13, the day he defeated Sanok, his son Terry – who became accomplished player in his own right – was born.

“It was June 13, the Feast of St. Anthony and my father had just dropped my mother off at St. Joseph’s Hospital in Paterson. When he got to Upper Montclair, Chet told my father he looked as pale as a ghost. After my father explained the situation (about having his first child), Chet told him all of his five-footers were good. It shows you the camaraderie those guys had,” Mike McBride said.

McBride’s success in the NJSGA Amateur Championship would continue. As part of his great season of 1949, he defeated J. Wolcott Brown, the 1928 champion, at Echo Lake Country Club. Eight seasons later, in 1957, he defeated another future NJSGA Hall of Fame member, Billy Dear, for his third title – this time, at the Rock Spring Club. In 1961 at Forest Hill Field Club, McBride defeated Lloyd Monroe for his fourth title. Monroe had won the NJSGA Amateur Championship in 1958 and would do so again in 1962. McBride’s 1961 victory capped a phenomenal run of four titles in thirteen years, during which time he went undefeated each time he appeared in the 36-hole final match – all against prodigious opponents.

In 1949 at Canoe Brook Country Club, McBride would win the MGA ‘Met’ Amateur Championship in dramatic fashion. In the fabled final match, McBride edged Joe Gagliardi of Winged Foot (later a Supreme Court justice for the State of New York) in 37 holes. McBride had done the near-impossible, coming back from seven-down with 11 holes to play.  He holed an 18-foot birdie putt on the 36th hole to force extra holes, where he won the match with a par.  It was a triumph New York Times columnist Lincoln Werden called “one of the greatest comebacks in the history of the tournament.”

McBride’s ties to the history of Arcola Country Club run deeply. He was a five-time club champion, two-time senior club champion, and was president from 1993-1996. In 1948, he became the first Arcola member to win the Arcola Cup, an invitational event which began 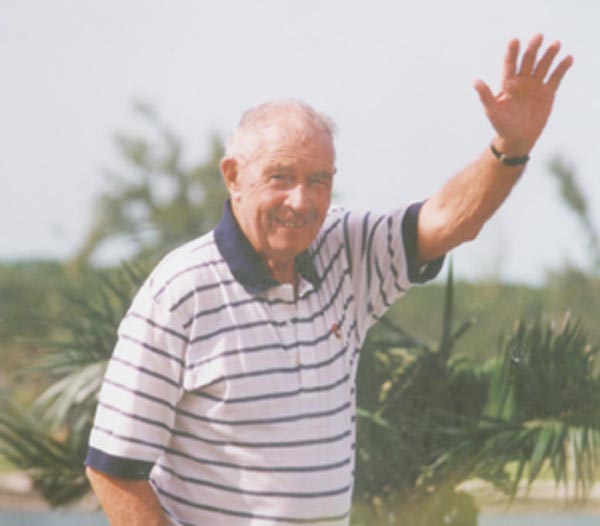 in 1916 and was traditionally held the week before the U.S. Amateur, attracting many of the country’s leading players. In the final match, he defeated another NJSGA Hall of Famer, Charles Whitehead, 4 and 3. At the conclusion of the match, the club announced that the Arcola Cup would be discontinued, which remained so until 2007 when it was revived on the anniversary of McBride’s victory. He also served as a trustee on behalf of Arcola in the early days of the NJSGA Caddie Scholarship Foundation.

Another longtime member of Arcola and friend of the family, Peter McLachlan, remembers McBride: “One of the great things about Joe was his incredible competitiveness in a friendly game but always in the most gentlemanly of ways. He would not give up an inch in any match. He hated to lose in anything.

McBride passed along his stellar abilities to his children. Along with Terry (three times) and Mike (once), Joe won four MGA Father and Son Championships. Mike and his son, Michael (Joe’s grandson), have also won the event. When Terry passed away in 2014, the Metropolitan Golf Association installed a trophy, ‘The McBride Cup”, which is awarded each year to the winners of the MGA Father and Son Championship in tribute to the family. The close connection between family and the game also led to the McBride’s being named Golf Family of the Year by Golf Digest in 1976.

The McBride family also realized tremendous success in the business world. Joe’s father, Frank, who never attended high school, was a master plumber who started the Frank A. McBride Company in 1898. Under Joe’s leadership, along with brothers Frank and Nevins, the company grew to become the 10th largest mechanical contractor in the United States, completing projects such as corporate headquarters for Merck, Nabisco, Becton-Dickinson, IBM, AT&T, Verizon, Volvo, New York Life and Hoffman-LaRoche. Other projects include Giants Stadium, Atlantic City casino hotels, Epcot Center at Disney World and the Cape Kennedy Space Shuttle Launch Pad B.

Over the years, McBride developed a close friendship with Charlie Yates, a member of Augusta National Golf Club with whom he had played in the North & South Amateur. Yates, a highly accomplished golfer and secretary of the club, invited McBride to join Augusta National.

“My father said he would love to join – and thanked him – but  told Charlie that he would never be able to play there with the club being so far from home, and his family and business commitments,” Mike McBride said. “He told Charlie to give his spot to someone who would appreciate it. It shows the kind of guy my father was.”

When McBride passed away in 2005, he left a magnificent legacy – one which can be appreciated through seeing the names of different McBride family members adorning trophies, awards, and championship boards throughout the Arcola clubhouse. His achievements as a champion golfer, astute business executive, and family man are truly to be celebrated.