KENILWORTH, N.J. - Described by Tom Doak as “the least prolific and most accomplished golf architect of all time”, George A. Crump, architect of Pine Valley Golf Club, possesses an unmatched and unique legacy. To this day, Pine Valley – Crump’s only design – is perennially considered by many to be the No. 1 golf course in the world. Just over 100 years since it’s opening, Pine Valley remains a thriving tribute to Crump’s vision and steadfast commitment to build a premier golf course.

A dedication written in the 1982 book, Pine Valley Golf Club – A Chronicle, produced by Pine Valley, states the impact of Crump:

“He not only had the idea, he found the location, bought the land, designed the course, and then supervised its construction – hole by hole. In doing so he unselfishly used a great deal of his personal fortune to achieve his ambition to build a world-acclaimed golfing Mecca. All former and present members of the Pine Valley Golf Club, their friends who have had the opportunity to play golf there, and those who will have the pleasure of experiencing it in the future, owe a debt to Crump of immeasurable depth.”

Crump (1871-1918) was born in Philadelphia and spent his formative years living in Camden, and later Merchantville, N.J. Born into a successful family with deep roots in Philadelphia and South Jersey, George’s grandfather, William Hawkins Crump, was once the editor of the Philadelphia Inquirer. George’s father, George W., served for 24 years as the British vice-consul in Philadelphia. The family owned the famed Colonnade Hotel in Philadelphia during the late 1800s, and also constructed and managed hotels in Cape May and Sea Girt, N.J.

The family’s successful business ventures allowed Crump to pursue various leisure activities, including golf, squash, and hunting. Golf became a passion of his, and by the turn of the century, Crump had grown into one of the top players in the Philadelphia area. He won the 1901 and 1912 Patterson Cup, and was a fixture on Philadelphia teams which competed in intercity matches with New York as well as the triangular Lesley Cup matches (which began in 1905) between Philadelphia, New York and Boston.

Philadelphia’s lack of success in these matches, along with a similar lack of success in the U.S. Amateur, was distressing to Crump and his circle of golfing friends. That circle included A.W. Tillinghast, who wrote in The American Golfer that Philadelphia’s competitive futility was a direct result of its deficient golf courses. He argued that the absence of a true championship test left golfers with nowhere to hone their skills to the same level as their competitors from New York, Boston and Chicago. It was that mindset that motivated George Crump and his friends to resolve to build a championship course that would rival any in America. The course would be designed to challenge the best golfers.

In 1912, Crump located a piece of land 14 miles southeast of Camden along the Reading Railroad. The location, at a railroad stop called “Sumner”, was in N.J.’s Pine Barrens where the sandy soil and better weather were more conducive to winter golf. It was a piece of land with which Crump was familiar from earlier hunting trips – and regardless of the swamps, pine forests, sand hills and dense underbrush, Crump believed the land was ideal. 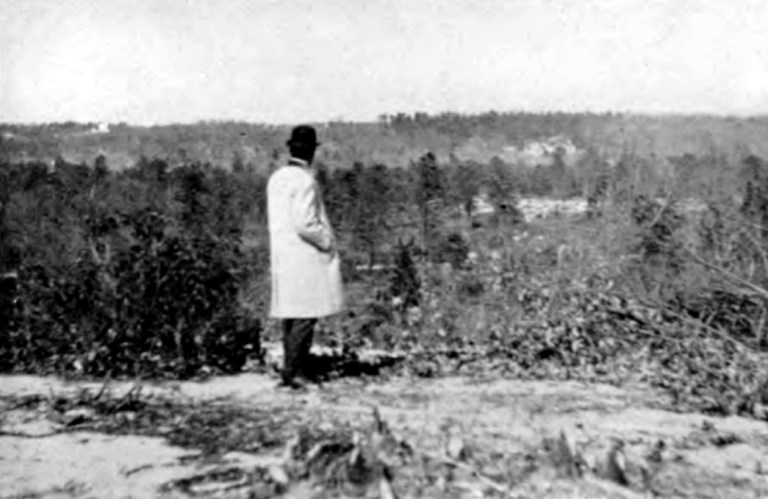 The determined Crump became the driving force behind the initiative. He purchased 184 acres of land in 1913 for $50 an acre and left it to others to form a committee to organize the club and solicit potential members. Crump, who by this time was a widower after his wife Isabelle’s death in 1907, was intently focused on the design and construction of the golf course. So much so, he devoted the next five years of his life to the project. He lived on the property year-round, initially in a tent and later in a bungalow constructed near the present site of the 5th hole (which also served as a temporary clubhouse).

Crump’s design influence was derived from many of the courses he played and observed in the British Isles, as well as Harry S. Colt, with whom he consulted extensively. While Crump sought input from several others more experienced than himself in golf course design, including Walter Travis, the course remained true to his own principles and convictions. Primary among those was the objective that Pine Valley would be a supreme test for the best players and would offer no concession for the less skilled.

Construction of Pine Valley began in earnest in 1913, and there was a tremendous amount of work to be done. It was a major undertaking to clear the land of trees and underbrush, remove stumps, drain marshlands, and build dams; so much so that the choice of land was characterized as “Crump’s Folly”. As a result, there were numerous setbacks in the construction process, and Crump exhausted much of his personal fortune to remedy the issues. Multiple accounts indicate that Crump spent over $250,000 of his own money, with no expectation that he would recoup his personal investment. 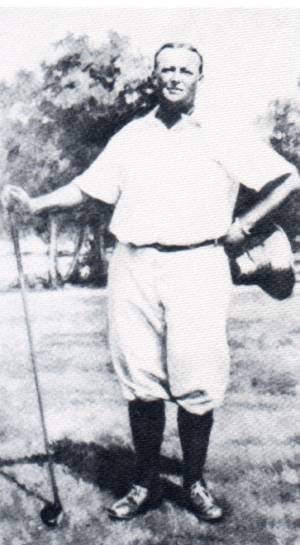 Sadly, the five years Crump spent pursuing his goal would be the last years of his life. On January 24, 1918, Crump committed suicide in his Merchantville home for reasons that remain unclear to this day. Some believe that years of setbacks, delays, and cost overruns – which Crump personally subsidized – while building Pine Valley led to the erosion of his personal wealth and his well-being.

Shortly after Crump’s death, his brother-in-law, Howard Street, stepped in to ensure the completion of the project, assuming the duties of club secretary and chairman of the green committee. Street enlisted several of late brother-in-law’s collaborators, including Harry Colt and his business partner, C.H. Alison, brothers Hugh and Alan Wilson, and a small group of members who were committed to seeing Crump’s unique vision brought to a conclusion. Early in 1921, all eighteen holes were in play, but a number of suggested revisions to the course were considered. Ultimately, only those that were planned by Crump or aligned with his design philosophy were implemented, and the following year, the golf course was in a perfected state, essentially as it exists today. Four years after his death, and nearly a decade after the project began, George Crump’s dream was finally realized.

Upon its completion, Pine Valley quickly drew praise from legends such as Tillinghast, Donald Ross, C.B. Macdonald, Francis Ouimet, Jerry Travers, Chick Evans, and Jim Barnes – a testament to Crump’s completed dream. As a tribute, The Crump Cup, arguably the pre-eminent invitational tournament for Mid-Amateur golfers, was created in George Crump’s honor and first played in 1922.