By Bruce Chamberlain, NJSGA Special Contributor
This is the second journal article in a five-part series as Todd Wiggins and Matt Scozzari embark on their journey to the 2022 U.S. Amateur Four-Ball Championship at the Country Club of Birmingham from May 14-18. The Upper Montclair Country Club pair earned co-medalist honors at the qualifier, hosted by the New Jersey State Golf Association at Canoe Brook Country Club in August, 2021.

Part 2
“A golfer has to learn to enjoy the process of striving to improve. That process, not the end result, enriches life.” Bob Rotella penned these words in his book, “Golf Is Not a Game of Perfect” but he could have been observing the team of Todd Wiggins and Matt Scozzari as they approach the USGA Four-Ball Championship in May at the Country Club of Birmingham in Alabama.

Last year, Todd set his sights on the 2021 Upper Montclair club championship and spent an entire off-season preparing for the big event. The long road culminated in July with Todd holding the trophy. “I set some goals and I knew that meant I need to maintain where I left off the previous fall to keep things moving forward.”

It’s now February of 2022 and Todd is on a similar path again, this time with a partner, Matt. Now they have a new and more time-pressured target. “We’re going all the way to Birmingham – we want to advance to match play,” said Matt. In other words, they’ll need to make the top 32 out of 128 teams in another 36 holes of stroke play qualifying. “Match play is our strength,” chimes Todd.

“As a feel player I find having the right feels early in the season to be difficult. I know I’ll rely on my feel in Alabama, so I’m doing some different things to try and develop the feel earlier in the season,” said Todd. Matt nods in agreement, “Trying to be in summer form by May is new to me… I’m used to a far more laid-back winter practice schedule.” While both men consider themselves “feel” players, that does not mean swing mechanics and Trackman numbers take a back seat.

In late January, Todd visited veteran club-fitter Jon Bock at Club Champion in Hackensack. The primary goal of the session was hybrid through 5-iron gapping. His difference in carry between his 4 and 5-iron had seemed negligible. “I made some swings and we looked at the numbers. Jon took (the 4-iron) to the bending machine, added some loft and I was able to gain the extra carry we were looking for.”

Flush with success, Todd fiddled with some variations of a driving iron. “Bingo – we got it dialed in… it will be a valuable club for me on 220-yard par 3’s, or that 230-yard shot to a par 5 and even will be useful off the tee on those tight par 4s where a 250-yard tee shot is enough.”

Meanwhile, Matt was back at the UMCC simulator working with Director of Golf Michael Holiday. “Mike had me make several swings with my wedge. He just watched and didn’t say a word. He saw that my wrist angle did not match the shaft angle at the top and I had zero pelvic rotation. He showed me how to get the feel for both and had me make a lot of half swings. Then we progressed to get my wrist into the correct position on full shots. I immediately picked up club speed and ball speed.” 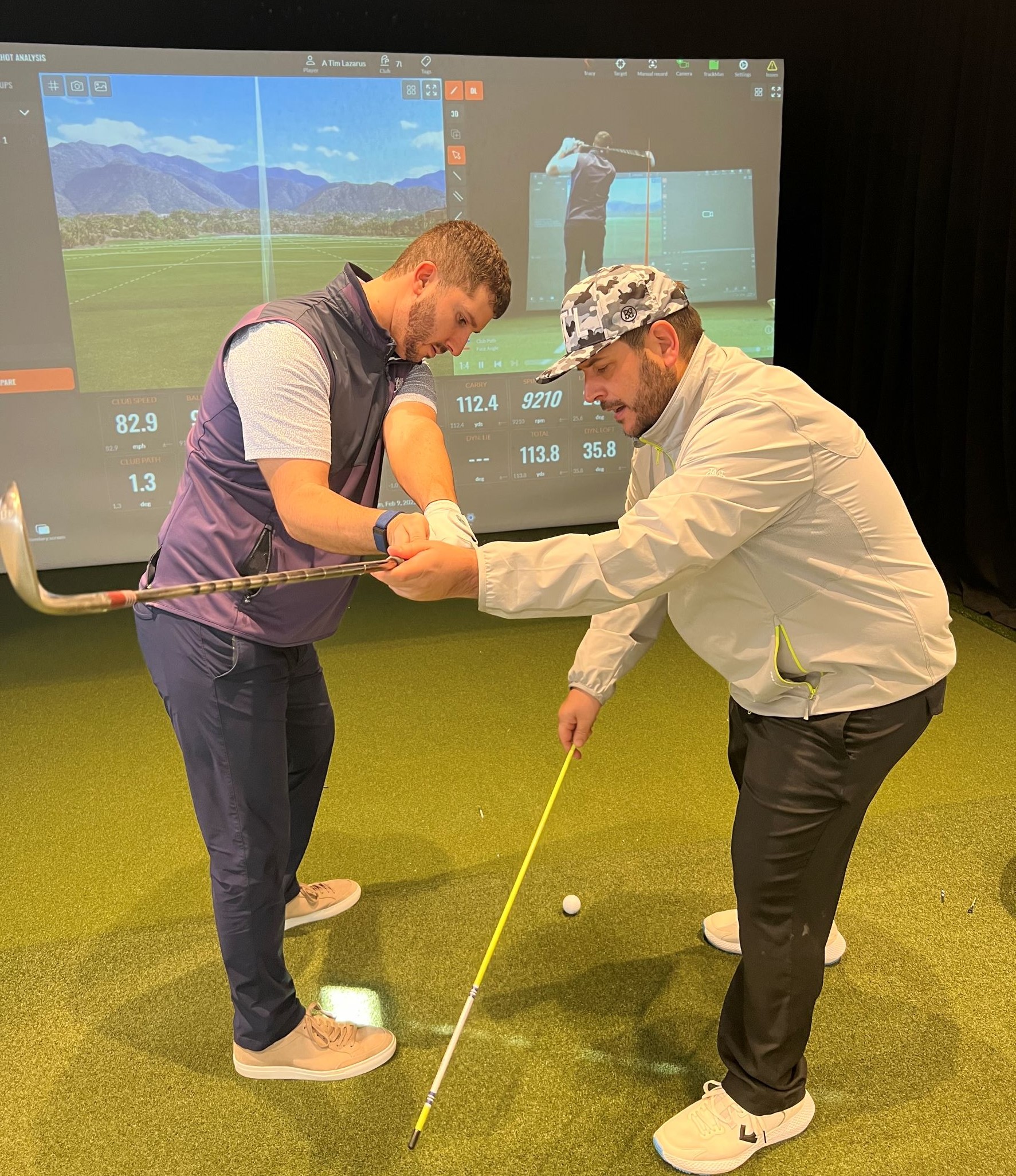 Soon, Matt was employing the same techniques with his driver. “My top numbers went from 113 to 116 club speed and 167 to 172 ball speed. I didn’t think I could gain such speed in a matter of minutes.”

Two weeks later, back at Club Champion picking up his new driving iron, Todd decided to take a fresh look at his driver, looking to reduce spin and gain some carry. Adjusting to state-of-the-art technology and modern swing thoughts has been an effort for the “old school” 50-year-old. “I still hit down on the ball – something I was taught to do with every club in the bag learning to play golf in the 1980’s with persimmon woods and balata balls.” After a few clubhead and swing adjustments “we found the results we were looking for.” Combined with a renewed flexibility and conditioning regimen, Todd is looking forward to getting on the course to see proof on the fairways. “I’m not looking for big gains here – but even a small increase will have positive impacts on my game.”

Peppered in with these activities have been several outings to The Clubhouse in Fairfield and even some winter league play at “Upper” – as the members often refer to their club. Near daily putting practice, in basements and living rooms, is always on the agenda.

Life continues to factor in. On a very positive personal note, Todd “popped the question” to his girlfriend Jane and now has a wedding date on the horizon. Business-wise, Matt had a weeklong seminar and Todd had a four-day business trip. Juggling personal, business, and golfing lives is all part of the deal. Todd had a tough week late in January where he skipped his stretching routines and gym time. “I started thinking about timing of everything and got stressed out.” The pair will spend five days in Pinehurst in late February that will hopefully allow for some free swinging (and thinking) in moderate weather.

With two and a half months to go, the plan is for fewer equipment and swing changes, and more “play” time - whether at the course or on a simulator. Games keep practice time fresh. “We played a game at The Clubhouse where we tried to hit different clubs at the “wrong” distances, like a 7-iron to 77 yards. We’re a team but we also like to compete,” says Matt.

The long and arduous NCAA collegiate basketball season began in early November, more than two months after Todd and Matt earned their spot in the National Four-Ball. “March Madness” begins soon and the finals are slated for early April in New Orleans. The UMCC duo will still have five weeks to go for their trip to Birmingham. Call it “May Mayhem.”